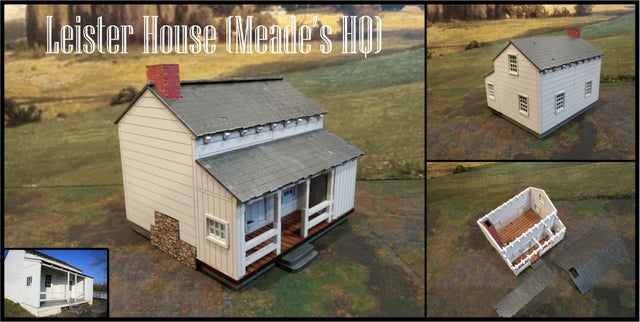 Add to Cart
The Lydia Leister farm – General Meade’s headquarters at Gettysburg – is on Taneytown Road at the intersection with Hunt Avenue. Its central location, close behind what was roughly the center of the Union lines, made it a perfect location as headquarters for the Army of the Potomac.
James Leister died in 1859, leaving behind his wife Lydia and six children. Lydia bought the wooden two-room house in 1861. It had a small hayfield and several apple and peach trees, as well as a spring. Lydia’s sister, Catherine, had married John Slyder, whose farm near Big Round Top was just a short distance away. It also played an important role in the battle.
Lydia and her two girls left the farm as the battle grew near. Its position on the reverse slope of Cemetery Ridge just inside the fishhook curve of the Union lines made it a perfect location for the nerve center of the Union Army. Meade’s famous council of war on the evening of July 2nd took place in the house’s tiny main room.
This nerve center was disrupted during the artillery bombardment preceding Pickett’s Charge. The farm’s location immediately behind the central point of the attack resulted in its being deluged with numerous overshoots from the hour-long Confederate barrage. One burst among the staff horses in the yard. Others carried away the steps and porch supports. Flying splinters dictated a move outside.
​When Meade saw some members of the staff clustering on the downrange side of the flimsy house, the fearless, twice-wounded Meade joked with them about their imaginary shelter. But for the sake of efficiency he eventually moved his shot-torn staff a few hundred yards away to a nearby barn. When it, too, proved to be a target, they moved on to the 12th Corps Headquarters on Powers Hill, which was part of the Union Army’s series of signal stations.
Source: https://gettysburg.stonesentinels.com/battlefield-farms/leister-farm-meades-headquarters/