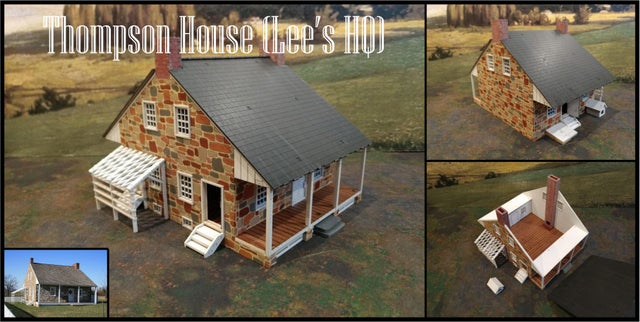 Add to Cart
The house of Mary Thompson, also known as Lee’s Headquarters, is on the north side of Chambersburg Road (US 30) on Seminary Ridge on the west side of Gettysburg.
Michael Clarkson built the stone house in 1833. Joshua and Mary Thompson became tenants along with their eight children. Joshua, however, was a drunk who left Gettysburg and died sometime in the 1840s. In 1846 Clarkson ran into financial difficulties. His good friend, future Republican Congressman Thaddeus Stevens, purchased the house at a Sheriff’s auction in trust for Mary Thompson. They would be co-owners until Stevens’ death in 1868.
At the time of the Battle of Gettysburg Mary was 70 years old. Her children were all grown and had moved out, but her son, James Henry Thompson, lived across the road. His house is also still standing today.
The area around the widow Thompson’s house was one of the bloodiest places on the battlefield on July 1. Supported by Stone's Pennsylvania Brigade, half of Battery B, 4th United States Artillery deployed on the west side of the property where the battery’s monument is today, pouring canister into Scales' North Carolina Brigade. Every field officer in Scales’ Brigade but one was killed or wounded and the 13th North Carolina Infantry Regiment was reduced from 180 to 30 men. Dozens of men from the 143rd Pennsylvania were captured in the railroad cut while trying to escape to Cemetery Hill as the Union defensive lines collapsed.
Mary Thompson stayed on at the house despite the danger. When the Union survivors retreated, and the fighting moved on into the city her house became a hospital for the men of both sides. Mary and her neighbors cared for the wounded.
​The house was an excellent candidate for Robert E. Lee’s headquarters. It was very visible, next to the main road coming into Gettysburg from the west, on which the rest of Lee’s army would arrive after July 1. The house was at the top of a ridge with an excellent view in all directions. And it was at the center of the Confederate lines. Although Lee spent much of his time in the saddle at Gettysburg, he is known to have taken a meal and slept in the house on July 1. Even when Lee was not personally present, the house was the communications center where messengers brought news of the battle to Lee’s staff and took away orders.
Source: https://gettysburg.stonesentinels.com/battlefield-farms/thompson-house-lees-headquarters/