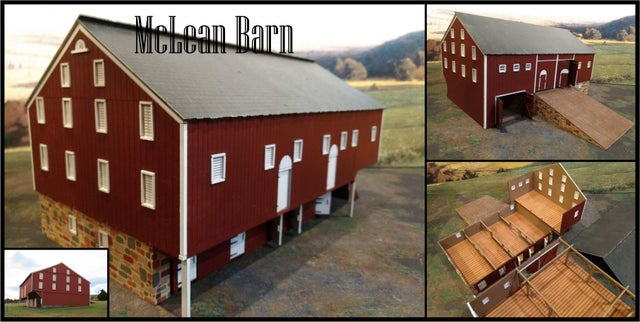 Detachable ramp for ease of transport/storage

Add to Cart
The McLean farm (sometimes spelled McClean) lies north of Gettysburg along Mummasburg Road at the foot of Oak Hill.
Moses McLean was a Gettysburg attorney who had served in the U.S. Congress from 1843 until 1845. During the war he lived on Baltimore Street in town and rented the farm to David H. Beams.
David had been drafted in October of 1862 and was serving with the 165th Pennsylvania Volunteer Infantry Regiment, a nine months regiment. The 165th was not at Gettysburg, serving at the time of the battle in Dix’s Peninsula campaign in Virginia, and mustered out later in the month.
​David’s wife Harriet and their three-year-old child were forced out of the house on July 1 as Confederate Colonel O'Neal's Infantry Brigade moved across its fields under heavy fire from Union 1st and 11th Corps artillery. They returned to find their belongings stolen or destroyed.
Source: https://gettysburg.stonesentinels.com/battlefield-farms/mclean-farm/