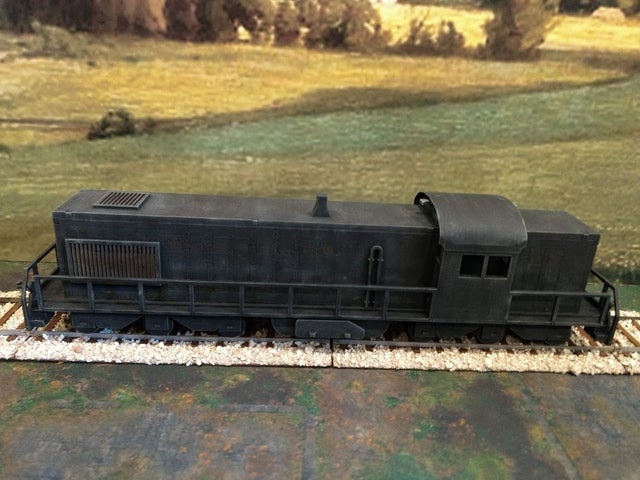 The finished model will best be used on straight tracks. Due to its size and the radius of 4Ground’s curved track it does not fit on it. Using O gauge model railroad tracks with a bigger radius will work.

Detailed instructions are available for download at www.thingsfromthebasement.com
Add to Cart
When the Iran was occupied in August 1941 by British and Soviet forces in order to open a save »back-door« for Lend-Lease deliveries to Russia, it happened not to the least in regard of the Iranian State Railway. The »ISR«, as called briefly, had been built in the late 1930s primarily to connect the Persian Gulf port of Bander-Shahpur with Tehran and the Caspian Sea port Bander-Shah. There also existed a section leading northwest to the Iranian-Russian border, but this part was not yet fully completed.
After the successful occupation, the British and Soviet forces immediately took over the control of the Railway and launched a regular transport of all sorts of supply goods.
However, they soon found out that the existing British steam locomotives and others were unable too tow sufficient amounts over the rough Iranian mountains and through the unventilated tunnels.
At this point, in late 1942, it was decided that the U.S. Military Railway Service (»MRS«) as part of the USA Transportation Corps (»USATC«) take over the Iranian Railway by 1943 in order to increase the flow of supplies so urgently needed by the Russian allies.
To overcome the existing problems, 57 of the 150 new ALCo RSD-1 Diesel Road Switchers were imported and erected until May of 1943. 70 others were directly sent to Russia as part of Lend-Lease, of which 58 actually arrived and 12 were lost en route.
Often deployed as pairs in order to provide maximum power, the Iranian Alcos soon became famous as the locos of the 1000-ton »Aid-to-Russia« trains.
Source: https://www.o5m6.de/redarmy/alco_rsd_1.php