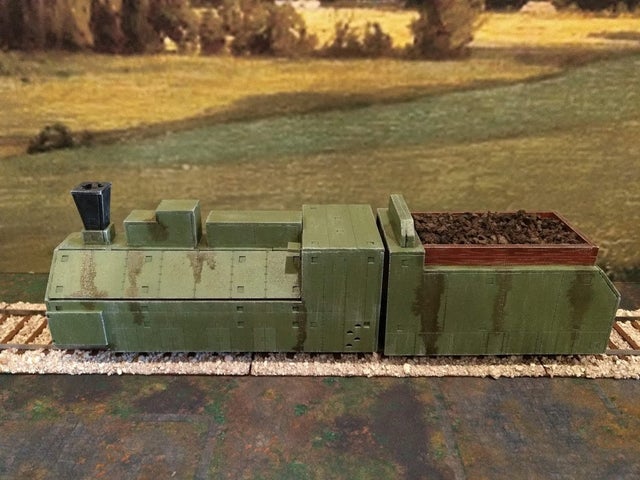 The finished model will best be used on straight tracks. Due to its size and the radius of 4Ground’s curved track it does not fit on it. Using O gauge model railroad tracks with a bigger radius will work.
​

Detailed instructions are available for download at www.thingsfromthebasement.com
Add to Cart
The 0-4-0 (0-8-0) Series OB appeared in the early 20th century and was a typical representative of the old Russian school of locomotive construction.
From 1901-1928, no less than 4,175, of countless versions, were built at Kolomna and several others Locomotive plants. Although technically outdated by the new »Series E«, it more than rectified its nickname »Ovechka« (lamb) due to its robustness and reliability. During the Great Patriotic War, the »Ovechka« excelled in many ways and on many occasions. It played a prominent role during the industrial evacuation of late 1941 and also during the Stalingrad battle of late 1942 when it suceeded in delivering supplies to the front line even under the heaviest enemy fire. In its armored version it became the steam engine of the well-known armored trains.
Source:  https://www.o5m6.de/redarmy/series_ob_loco.php